The actress does not notice anything, concentrated as she is in her own story. The journalist nods now and then and tries to look interested. But his interest is still focused on the potato chips. 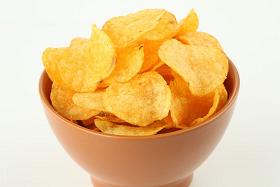 The journalist, Louis, puts a fry on the table and crushes it with a glass.

More gestures and annoyed looks from the controller and the actress.

The reporter takes a potato chip, and discretly dips it into the water glass before putting it into his mouth. The talking actress looks with disapproval but keeps talking.

Again, a loud: CRUNCH and gestures of desperation from the controlling room.

Louis, increasingly angry and stubborn, extracts two dentures of false teeth from his mouth. His mouth looks sucked in. The actress finally waits from him to say something, and he responds with a reassuring sound without opening his mouth. He introduces the dentures and one potato chip in his pocket. With his hand tries to process the chip.

There is a sound of grinding chips, but not as loud as to disturb the radio technicians too much.

He extracts chip powder from his pocket and puts it into the glass of water. He then drinks from the glass. But he starts coughing.

The technician and the actress wait patiently from him to stop coughing.

The interviewed woman tastes a potato. Everyone looks attentively. Nothing. No noise.

The journalist tries again to eat a potato in the normal way, but the acoustic properties of the room causes him to make a loud noise.

In the meantime, the actress grabs a handful of fries. Keeps talking with the full mouth. Nothing happens.

Louis puts the dentures in the glass, throws a potato in, and shakes gently. In the meantime, he gest thirsty, takes the glass of the actress and drinks. She is busy talking, but suddenly feels also thirsty and tries to drink some water. But he wrongly takes Louis glass, with the dentures inside. After drinking a sip, notices the inconvenience and drops the glass. Angrily looks at Louis.

Louis recoves his dentures, puts the soaked potato chip in the dish, crushes it with a glass, and finally drinks from the plate. Success! There is no noise. He is ready to continue eating, but the actress takes the last potato.