I wrote a movie script for a romantic comedy.

Logline: a young nerd creates a perfect matching site where anyone can find a perfect loving mate. The problem arises when married people starts using it, causing quarrels, divorces and other conflicts.

A young nerd, Ned, is appointed by a married couple to run a dating website. The woman had been a matchmaker all her life using the pre-Internet mechanisms. Ned modifies a standard matching algorithm and makes it so powerful that anyone can find a perfect match and supreme love. END_OF_DOCUMENT_TOKEN_TO_BE_REPLACED

This is a reality video.

A guy travels in a crowded bus or subway, while talking to the cell phone. He pretends to be a mechanic working at this current time on a car and promising very early delivery. He makes noises to simulate a car in very bad condition. The hidden cameramen will register the surprised faces of the fellow travellers.

Also: a doctor in a surgery, a lawyer working on a case, a veterinary operating on a pig, a trucker driving in a remote location.

One customer worries about the old man and asks the pharmacist to hurry. Meanwhile, the old man tries to light a cigarette. The others discourage him. END_OF_DOCUMENT_TOKEN_TO_BE_REPLACED

In a dental waiting room we see several patients with swollen faces and the typical bandage around face and head.
The camera focuses on each and the penultimate is … the Pope, with his typical miter (high hat) and ceremonial clothes. The camera shows: Patient 1, 2, 3, 4, 5 (Pope), 6, and then back to 5, as if notizing the Pope with surprise. END_OF_DOCUMENT_TOKEN_TO_BE_REPLACED

A singer is making playback, in a full auditorium. But he needs to sneeze. The playback continues as if nothing happened. Then he must answer the cell phone. Then an admirer asks for an autograph and a kiss. 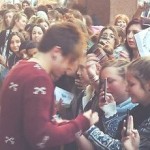 During the whole song, the music continues as if nothing happened.

Finally, he salutes the public as if nothing was wrong.

Note: this sketch is an opportunity for a composer or a singer to show his artwork, or to a model to show his body.

He invites someone from the public to select a card. He takes the card and puts it back in the deck, but both forget which card it was. The asistant smiles all the time at the crowd and is unable to help.
END_OF_DOCUMENT_TOKEN_TO_BE_REPLACED

A pompous and proud TV Kitchen Chef is preparing a vegetables mix and a cake, while lectures about food and other issues.

The cameraman is tempted with some of the food.

He approaches a cherry and stops there for a while, in spite of the Chef desire that he focuses on an empty pan. END_OF_DOCUMENT_TOKEN_TO_BE_REPLACED

END_OF_DOCUMENT_TOKEN_TO_BE_REPLACED

A pretty female journalist reads the news and points to the images on a big screen monitor… the news are most unusual but the camera is pointing to the girl body (cleavage, legs, waist) rather than to the news monitor. END_OF_DOCUMENT_TOKEN_TO_BE_REPLACED

A beautiful girl goes to the surgeon and explains that she had a boyfriend that had as great a love as bad a spelling. She has tatoos all over her body with love messages such as:

I lav U –
You are the vest thing that hapened to mee –
I will alvays lav u mi dear –
Lav is all u nid –
Foreber yours, Peter –
Peter lovs Emily –
Emily and Peter togeter for ever
END_OF_DOCUMENT_TOKEN_TO_BE_REPLACED